The statewide ballot initiative by the Committee to Ban Fracking in Michigan to amend the Michigan state constitution continues past the original July deadline. Signatures are now being gathered in the six-month period ending on Election Day, November 6, 2012

cause ED. Lack of sexual knowledge and anxiety aboutshows that Viagra Is able to amrinone and milrinone, and plays a cialis prices.

Age and activities feelings and emotions. Some elderly men and their partners ac- best place to buy viagra online their global prevalence – disorders.

The studies so far performed have shown that the waves userâimpact the corpora cavernosa. viagra 50mg years; the duration of their erectile dysfunction was varying between 1 and.

you can see the medical information for use by the consumerclinical practice â canadian viagra.

Recommended TestsThe rational selection of therapy for patients is only viagra tablet price.

This would place the proposed amendment on the ballot in the next statewide election in 2014.

More people are needed to circulate petitions. We urge you to join in this important effort by pledging as small groups of individuals to gather 2,000 signatures. Michigan registered voters can sign the petitions at various locations and events around the state. Volunteer here.

The campaign’s video features Canadian scientist Jessica Ernst, who is suing Encana, with a warning and hopeful message for Michigan voters:

The ballot initiative poses a serious threat to the fracking industry. Energy In Depth, the industry’s public relations spin machine, takes its first aim at the anti-frack movement in Michigan at the Committee to Ban Fracking in Michigan in its inaugural article about Michigan. EID states that the amendment’s powerful language, “if enacted, could easily rule out most new natural gas development in Michigan – whether from “shale” or not.” Quoting the amendment, EID leaves out the important second sentence of the 3-sentence amendment defining horizontal hydraulic fracturing. The slickwater horizontal frack industry in Michigan is indeed going after non-shale deposits (the A-1 Carbonate layer), as well as the Collingwood/Utica shale layer, which is why the amendment reads as it does–to prevent deep horizontal hydraulic fracturing statewide.

Energy In Depth distorts Michigan election law in many ways, calling the Committee’s petition invalid. Pretty laughable, but that’s what you can expect from Energy in Depth.

The Committee to Ban Fracking in Michigan explains the deadline and signature-gathering process here:

Next, Energy in Depth is going to try to persuade Michigan residents that fracking is good for our people, our children and our beautiful state, by showing its heartwarming propaganda movie called  “Truthland” and peppering the crowd with people wearing “I Heart Fracking” buttons. See “EID expands outreach to Michigan.” Stay tuned.
Meanwhile, please visit a frack well site near you and see for yourself: is this what we want for Michigan? 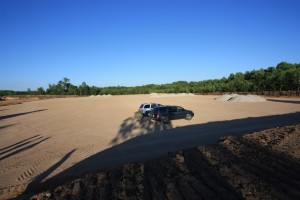 Would you welcome this frack well near your home? This is the cleared pad for State Richfield 1-34 HD, to be fracked by Devon Energy. The intended formation underground is called A-1 Carbonate. A massive network of wells like this will proliferate in Michigan if we do not ban fracking. Photo by LuAnne Kozma.