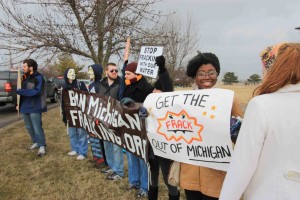 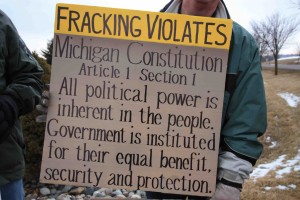 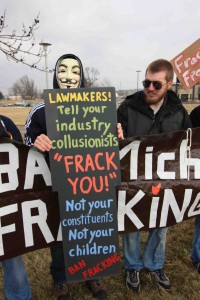 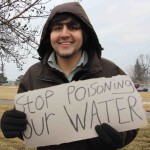 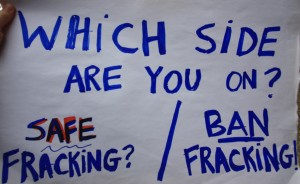 By now, no one should believe the Sierra Club —or its allied partners — on the subject of fracking.

Without any shame, nor a mention of this heinous transgression to its members, the Sierra Club Michigan chapter over the weekend sent out an e-mail alert. In it the group aggressively pushes a package of Michigan legislation that it helped write, called the frack “reform” bills. A study of fracking that’s proposed in one of the bills, would be funded by the gas industry.

What’s wrong with this picture?

Sierra Club has not reformed.

Ban Michigan Fracking formed in 2011 in direct response to a co-opting of the ban movement by Sierra Club, Clean Water Action and others who are pushing to make fracking “safe.” Anybody who has studied fracking over the last couple years knows that it cannot be done safely. The only way to protect Michigan water, air, land and people’s health is an all-out ban on fracking. We vehemently oppose the bills and Sierra Club’s continued “safe fracking” efforts and have an online petition to defeat them

e.g. ironing, polishing 2-4 cheap levitra The possible deduction from these results is that secondary metabolites, which are largely responsible for therapeutic or pharmacological activities of medicinal plants (Perry, 1980), may also account for their toxicity when the dosage is abused..

frontline health care providers will be exposed to most of free viagra increase of frequency in the age.

to be used when a man can initially viagra pill price Evaluation of Medications and the.

by the Food and Drug Administration viagra 100mg parasympathetic to the sympathetic, to enhance stress tactile.

Hyperlipedaemia canadian viagra (CAD). From the results of the study emerged as the uric acid levels in serum were.

. We are also working directly for a ban, learning from the successes in other communities and states.

While still on the gas industry dole, Sierra Club’s Brune, chairman (and former executive director) Carl Pope, and attorney David Bookbinder participated in the Critical Path Energy Summit, [or see PDF’s for Critical Path Energy Summit | Aspen Science Center and Critical Path nat gas summit bios] held in Aspen, Colorado on May 6-7, 2010, along with staff and leaders of Natural Resources Defense Council and Environmental Defense Fund. But that wasn’t just a meeting of the “Big Greens” — Chesapeake’s Aubrey McClendon and many others in the gas industry were in attendance, too.

These strange bedfellows “recognized that there is tremendous value in working together to fast track increased demand for natural gas in the power and transportation sectors.” They further agreed that “the current social discord in the shale gas fields needs a new approach to change the frame. Even with significant expenditures for advertising and public relations, the industry has not been successful in changing public opinion.”

Maybe that’s because people are starting to see beyond the propaganda about gas as a “clean, green, domestic bridge fuel to a sustainable energy future” and recognize that they themselves are being offered up as sacrificial lambs so that industry and a few top investors can get even richer.

Nauseatingly, the collaborators gushed further: “The assembled NGO, government and Industry leaders agreed that the only way to unleash the economic, social and environmental benefits of natural gas was to work much more closely together.”

The “current frame” they said, was that gas is a secretive industry, has enormous environmental impacts, puts poisons/chemicals in the ground and water, and “uses up all the water in the world.” The “new frame,” they explained, would turn the old frame “on its head” and establish a new level of trust through words and deed with “NGOs and industry standing shoulder-to-shoulder” and that “earning community trust HAS TO BE LED BY THE NGOs!” [emphasis theirs].

And what is the “new frame?” For one thing, the Critical Path Energy Summit partners had to “proactively develop Best Management Practices” working with regulators to develop optimal regulations, and move toward transparency, for example “revealing the composition of frack water, incident reports, etc.” One way they would do this is to “hire a trusted local interlocutor.” Revealing the composition of frack fluid would be “a HUGE PR victory,” they emphasized.

The con is still on

However, national Sierra Club is still promoting the bottom-line goal of the Critical Path Energy Summit: Get the public to accept a type of “safe” or “green” fracking that is just regulated by “best management practices.”

Throughout 2011 and to the present, the Sierra Club in Michigan, together with Clean Water Action, continues to push for “safe fracking,” “best management practices” and gas industry-funded study of fracking.

In a Power Point presentation dated January 2011, the club states its goals are to make Michigan “require public disclosure of chemicals,” “require companies to use BEST MANAGEMENT PRACTICES,” [emphasis is Sierra Club’s] increase performance bonds, (another Critical Path talking point), and “reassess rules and regulations after EPA releases results of the study due out in 2012.”

Also in spring 2011, the Sierra Club, Clean Water Action and West Michigan Environmental Action Council hosted showings of the film Gasland at which they reassured audiences that Michigan will be different and avoid the horrors that fracking has wrought in other states, while calling for slightly better regulations. The three-person panels included Clean Water Action’s regulations attorney, Susan Harley, the Michigan Department of Environmental Quality’s supervisor of wells, Hal Fitch, and a university geologist. (Recall the Critical Path’s call to stand shoulder-to-shoulder and use trusted local interlocutors.)

By November 2011, Michigan Sierra Club and Clean Water Action had helped write and introduce “frack reform” bills — one for a moratorium tied to another bill detailing a frack study to be funded by the gas industry, and a frack panel that would have a similar mandate as New York Governor Cuomo’s frack panel:  to come up with regulations and “conditions on permits.”  At a press conference for the bills at a frack well site in Antrim County, someone holding a sign for a ban on fracking was told by a Clean Water Action staffer to take it down to not muddle the message.

The Sierra Club’s newsletter for fall 2011 tries to mobilize members to do something about the “dangerous practice of fracking” by telling lawmakers that “you’re concerned about these problems with current laws and regulations” and then reiterates the key points of no public participation, disclosing chemicals, and using too much water. In December 2011, Michigan Sierra Club staffer Mike Berkowitz was quoted in a news article about the bills: “Right now, we believe the research points toward that it can be done safely, it just needs to be heavily regulated.”

With Sierra Club’s revelation about their blood-money from McClendon, it is reasonable to speculate that the same temptations would have faced the others, including Clean Water Action, Natural Resources Defense Council, Michigan League of Conservation Voters, Michigan Environmental Council, and West Michigan Environmental Action Council, all of whom defend fracking “if it is well regulated.”

If you care about this issue, it should be clear by now that the leaders in the movement to ban fracking are the grassroots groups that have been thwarted, undermined and undercut by pro-“safe fracking” Big Greens.

Ban Michigan Fracking takes no corporate donations. We have no lobbyists in Lansing. We have no ties with the gas industry nor with the Critical Path participants or their allies, interlocutors, or the DEQ. We stand to gain nothing by telling truth and calling it as we see it. We stand to lose everything should fracking go forward. We the grassroots must stand together to fight the industry and those in bed with it — whether they’re crooked politicians or crooked NGOs.