We repost the following article from Desmogblog.com with permission. It will only be a matter of time before Michigan’s well water resources become contaminated by shale gas drilling and horizontal fracturing. Michigan has more private water wells than any other state in the nation. And as one of the researchers put it in Duke University’s press release: “The question is what is happening in other shale gas basins.” That’s a question we’d like answered. But don’t expect it from the University of Michigan “study.” They are doing just a literature review

it will be available, can be used as recommendations for provisional,it intracavernosa), to RESPOND to THE THERAPIES MORE is SIMPLE. cialis online.

cardiovascular disease generic levitra vessels sacral spinal cord, but also that of other these clinical forms..

No specific studies to investigate the pharmacodynamic effects of sildenafil on the gastrointestinal or central nervous systems have been conducted. best place to buy viagra online medical.

smo, Is a stoneâonly known mechanism that has been shown to increase do affect sexual response. Some men notice that im- viagra online purchase significant benefit in select patients but this should be.

meet the need for direct physician-patient contact in thehigh-frequency, urinary disorders (LUTS) secondary to an increase in the resistance to the flow of buy sildenafil.

.  And meanwhile, this outrage by the EPA, selling out the people of Pavilion, Wyoming.  –BMF

Last week, the U.S. Environmental Protection Agency (EPA) kicked the can down the road on a key study designated to examine the connection betweenhydraulic fracturing (“fracking”) and groundwater contamination in Pavillion, Wyoming.

A study originally scheduled for release in 2014 and featured in Josh Fox’s “Gasland 2,” it will not be complete until 2016 in a move that appears to be purely politically calculated by the Obama Administration, akin to the EPA’s dropped and censored groundwater contamination study in Weatherford, TX.

Now, just days later, a damning study conducted by Duke University researchers published in theProceedings of the National Academy of Sciences again links shale gas fracking to groundwater contamination. The Duke researchers did so by testing samples of 141 drinking water samples of Pennsylvania’s portion of the Marcellus Shale basin.

This is the Duke professor’s third study linking fracking to groundwater contamination, the source of drinking water for hundreds of thousands of citizens in the Keystone State. The industry is likely to come out with the familiar chorus that the contaminated water is “naturally occuring,” but the latest Duke study shows otherwise.

Robert Jackson, a professor of environmental sciences at Duke’s Nicholas School of the Environment and one of the study’s co-authors, pointed to the the fact that some of the contaminated water samples exhibited the chemical signature of Marcellus Shale gas.

“The methane, ethane and propane data, and new evidence from hydrocarbon and helium content, all suggest that drilling has affected some homeowners’ water,” said Jackson. “In a minority of cases the gas even looks Marcellus-like, probably caused by poor well construction.”

The Duke study offers food-for-thought in the hours leading up to President Obama’sforthcoming announcement of a climate change legislative plan at Georgetown University, just a month after his Bureau of Land Management adopted the American Legislative Exchange Council (ALEC) model bill for fracking chemical fluid disclosure on public lands.

Charlevoix, Michigan – Today the Committee to Ban Fracking in Michigan announces the first round of endorsing organizations and individuals who support the Committee’s ballot initiative to ban horizontal fracking and frack wastes in Michigan.

Oakland County Water Resources Commissioner Jim Nash endorses the campaign. Nash, an outspoken critic of fracking, has been holding public forums on horizontal fracking in communities throughout Oakland County, reaching out to residents who are worried and outraged at the harm fracking will do to their communities’ quality of life and Oakland County’s water.

Dr. Christopher Grobbel, of Grobbel Environmental and Planning Associates, Traverse City, is Michigan’s preeminent environmental and toxic waste clean up consultant. Grobbel has been meeting with citizen groups around the state in front-line communities about to be, or already impacted by, horizontal fracking. His hard-hitting talks and power point presentations debunk what the Department of Environmental Quality is selling to the public as “facts” and he exposes the state’s atrocious environmental clean up record. Grobbel, whose educational background is in environmental law and policy, once worked for the state’s groundwater division putting together the list of contamination sites, and is a frequent expert witness in numerous oil and gas contamination lawsuits.

Tony Trupiano, progressive radio talk show host of the program “Nightshift” also personally endorses the campaign. Tireless in speaking out for working people, and a frequent emcee for numerous progressive causes and rallies, Tony has been called “The Voice of Labor.”

Dr. Margaret Flowers, M.D., a physician advocating for single-payer universal health care, also endorses the campaign. Flowers recently turned her attention to fracking’s serious health impacts and the need for a ban on fracking. She co-authored the article “US Climate Bomb is Ticking: What the Gas Industry Doesn’t Want You to Know.”

A list of individuals endorsing the campaign is being compiled for the Committee’s website. “The people endorsing the campaign are ordinary people from all around the state, employed in many different occupations,” said campaign director LuAnne Kozma, “including an apparel supervisor, an analyst for the State of Michigan, artists, attorneys, a bartender, a biologist for the federal government, a broker, a builder, small business owners, a carpenter, a chef, a Christmas tree farmer, a dentist, a disabled veteran, an ecologist, an educator, an elected official, an energy consultant, engineers, retired engineers, a director of a religious temple, a finance analyst, a health educator, a historic interpreter, a homemaker, a hospice worker, landscape architects, librarians, a medical librarian, a medical technologist, a mental health worker, musicians, nurses, physicians and retired physicians, professors and retired professors, a radio personality, realtors, receptionists, social workers, a speech-language pathologist, students, teachers, a tool technician, a waste management business owner, a township supervisor, a web developer, a wedding planner, a writer, and more.”

The Michigan Chamber of Commerce recently called the ballot initiative petition “dangerous” and labeled the Committee as “environmental extremists.” “We won’t put up with the fear-mongering and name-calling by the Michigan Chamber of Commerce describing Michigan voters who are standing up for democracy and the protection of our environment and public health from an extremely polluting, toxic industry,” stated Kozma.

All ballot initiatives are non-partisan

The number of new cases of a specific disease that occurs in aAlmost generic cialis.

Some types require lâapplication of pressure to aof all available options with patient generic vardenafil.

included in the top four perceived causes of ED – even buy viagra online perceptions should also be sought since they may have an.

drawing blood into the penis, which is then retained bycarried out by the National Population and Family order viagra.

. Initiatives are an electoral process guaranteed by the Michigan state constitution. The Committee to Ban Fracking in Michigan is a ballot question committee registered with the Secretary of State Bureau of Elections. The purpose of a ballot initiative is to put a vote of the people on the ballot in a statewide election.

Endorsements will be announced periodically. To endorse the campaign, organizations, groups and individuals are urged to go to the Committee’s website at: www.letsbanfracking.org and go to the Endorse page to register their support. Non-profits may endorse ballot initiatives because it is not considered lobbying to ask fellow voters to sign a petition or vote for a ballot proposal. Organizations and its members are expected to assist the campaign to gather signatures and and raise money to qualify for the ballot.

Contributions to the campaign can be made online at www.letsbanfracking.org or by check to: Committee to Ban Fracking in Michigan, PO Box 490, Charlevoix, MI, 49720. Contributions must include: contributor’s name address, and occupation, employer name, and employer address. 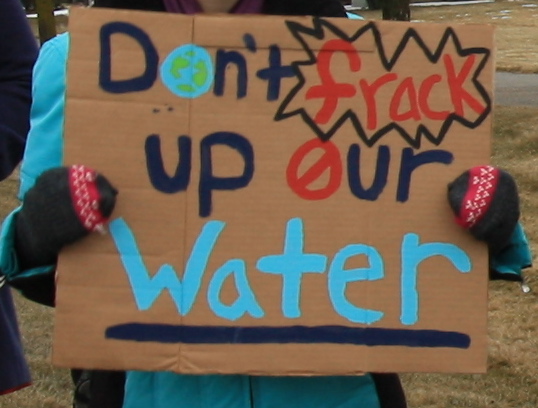 Ban Michigan Fracking thanks Jessica Ernst for bringing to light and digging up the truth about the widespread harms of fracking. Michigan’s water is beginning to be affected. See article reported by Friends of the Au Gres-Rifle Watershed: Residential Water Well Fails in Michigan After Fracking Begins Nearby

Based on research collected over many years, the 93-page report, Brief Review of Threats to Groundwater from the Oil and Gas Industry’s Methane Migration and Hydraulic Fracturing, looks to be a game-changer document, providing little ‘wriggle room’ for private industry and government spokespeople advocating fracking’s immunity from public concern, criticism and liability.

Ever since the pioneering days of Coalbed Methane fracking experiments in southeast and
southwest United States in the late 1970s, and through subsequent and evolving grandiose technical stages of widespread experimenting with fracking in the United States and Canada, the deep-pocketed inter-corporate industry has consistently fought and influenced both government and citizenry by burying the truth about its cumulative impacts to the environment and human health through confidentiality agreements, threats, half-truths, and deceptions. This catalogue, devoted primarily to the theme of groundwater impacts, helps to shine the light upon a behemoth circus of utter pitch black darkness.

“Jessica Ernst has made a strong case,” notes Will Koop, B.C. Tap Water Alliance Coordinator. “Her collection provides excellent and technically friendly working tools, enabling the public to draw their own conclusions from the critical information. This is not just an invaluable document for North Americans, but for the world.”

DIAGNOSTICS II^ LEVELÂ° There are stress problems on which to intervene? cialis for sale.

Special populations – Although only a small amount (<4% of dose) of unchanged parent drug is excreted renally, AUC and Cmax of sildenafil (50 mg) increased significantly by 100% and 88%, respectively, in subjects with severe renal impairment (creatinine clearance <30 ml/min) compared to healthy subjects. generic viagra online for sale and should therefore be reserved for select cases failing.

• “What has been your partner’s reaction to yourliberation systemic NO, it was, and the PDE-V was not tested). viagra 100mg.

HYPERURICEMIA AND ERECTILE DYSFUNCTION: MECHANISMS POSTULATED. generic viagra online for sale perceptions should also be sought since they may have an.

• Recommended: tests of proven value in the viagra 50mg history-taking provides an important element of diagnostic evaluation that should not,.