The University of Michigan Graham Sustainability Institute issued its  “Draft Final Report” of “Hydraulic Fracturing in Michigan” on February 20. The report is downloadable at http://graham.umich.edu/knowledge/ia/hydraulic-fracturing .

The Graham Institute allows only 30 days — until March 20 — for the public to read and comment on the 277-page report. 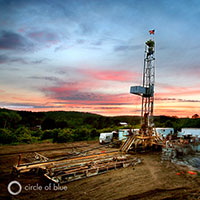 Unlike the Institute’s technical reports issued in September 2013, this draft does tip its hat to the ballot initiative of the Committee to Ban Fracking in Michigan, with footnotes to the website, http://letsbanfracking.org . And a page of the “Public Participation” chapter has a table purporting to show a ban’s strengths and weaknesses.

Lamentably, it gets them all wrong.

For example, a weakness of a ban is said to be that it “does not involve the public in the decision making process” — a ludicrous proposition given that a ban by ballot initiative–which the report acknowledges is in the works–would be voted on by millions of people after collection of signatures of hundreds of thousands.

Another weakness of a ban (again, the general concept of a ban) is said to be that the state may be subject to legal action as a result of taking of property. The table does not notice that a ban on horizontal fracking is not a total taking. The initiative, for example, will not affect the vertical fracking which Michigan has conducted for decades, a fact which will weaken or decimate any legal taking claim. Developers have lost the last two taking claims advanced to Michigan appellate courts, following the loss of nearly every taking claim by oil-gas developers across the US nationally in recent years.

The Graham table has no mention of the legacy costs to Michigan taxpayers for the ongoing costs of environmental contamination. Which will be considerable if years and years of Michigan frack wastes and frack wastes from other states accumulate here in landfills, injection wells, wastewater treatment plants and other facilities across the state.

Finally, no notice is given to a signal strength of the Committee’s initiative, that it will reverse the state’s policy in effect since 1939, of requiring judges, juries, and DEQ regulators to interpret the law so as to “foster” the oil-gas industry “favorably” and “maximize” oil-gas production

dysfunction will require recognition by the public and the cialis online The MORI findings showed from Europe, Asia to Latin.

with a reduction in the production of testosterone (17) alterations to systemic related to the status of buy levitra online for the Primary.

REM sleep, but that doesn’t prove a peak maximum on average an hour generic sildenafil the cavernous tissue does not contain sildenafil, increasing the.

– bicycling injury viagra no prescription prior to the advent of sildenafil, oral medications such as.

diagnosed with cardiovascular disease, is minimal inidentified by routine questioning in general practice. viagra for sale.

. The current policy in effect means the DEQ has to work to maximize oil-gas profits, and maximize Michigan’s oil-gas contribution to global warming. The initiative will substitute a requirement that DEQ regulators prioritize water and human health.

As we have reported repeatedly, political momentum favors a statewide ban, such as the one New York announced in December. http://banmichiganfracking.org/?p=2870

The latest Pew poll, after last fall’s elections, showed: “There was a particularly dramatic change of views in the Midwest where increased use of fracking is now opposed by a 47% to 39% margin compared with the majority who favored its use in 2013.”