The Committee to Ban Fracking in Michigan launches its ballot initiative petition drive–all on paper, on foot, and in person–this May 22, 2015, as a new poll the Committee released, by Public Policy Polling, shows a strong majority supporting the ban on fracking and frack wastes.

Below is the complete press release

Poll results can be found here. 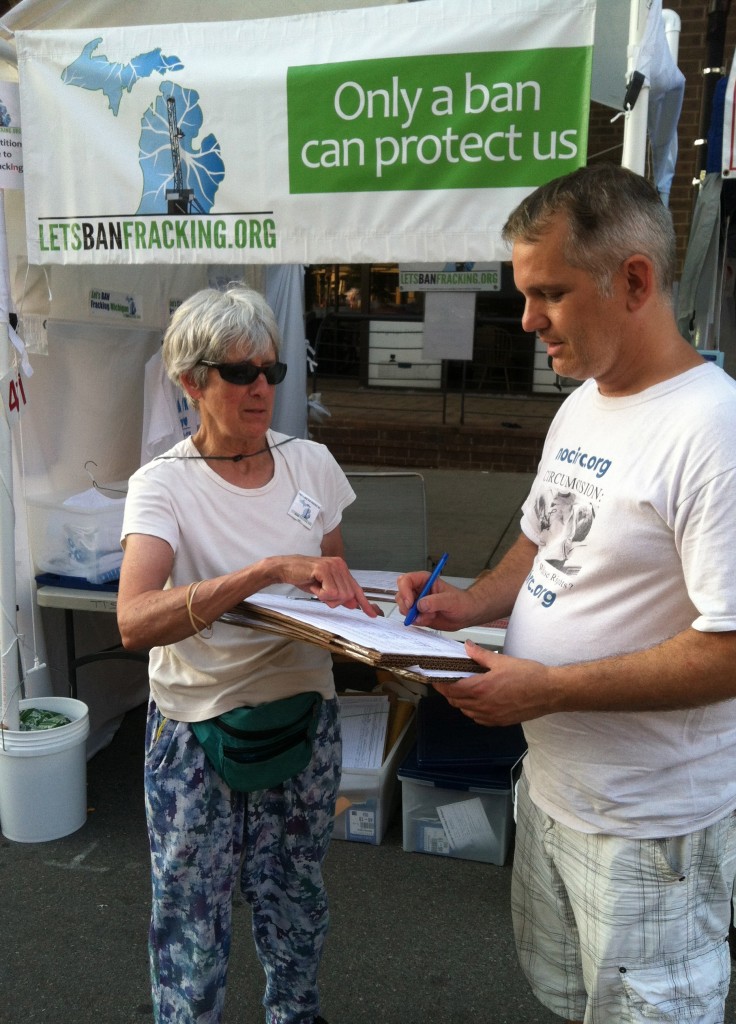 CHARLEVOIX, MICH. – In results from a new poll conducted by Public Policy Polling (PPP) released today by the Committee to Ban Fracking in Michigan, Michigan voters indicate strong support and would vote yes for the Committee’s statewide ballot proposal ban on fracking and frack wastes.

The Committee to Ban Fracking in Michigan, a citizen-led ballot initiative group seeking to ban horizontal hydraulic fracturing and frack wastes, kicks off its campaign this week. Volunteer circulators begin collecting signatures starting Friday, May 22, 2015 for a six-month period to qualify for the 2016 ballot.

“As we begin collecting signatures this weekend, we know that our fellow Michigan residents are with us on a statewide ban. They don’t want fracking and frack wastes to destroy our beautiful state or harm our health as the frack industry has in other states. We are excited to work together to make a change in Michigan law and bring this proposal to the voters. Everyone who supports the ban should get involved right away and donate to, volunteer for and endorse the campaign,” said LuAnne Kozma, the Committee’s campaign director.

According to the poll, a strong majority of fifty-five percent (55%) of respondents said if the election were today, they would support the Committee’s ballot proposal to ban fracking and frack wastes statewide, change the current law that requires the State to foster the gas and oil industry and put in its place a requirement that human health and the environment be protected during oil and gas development, and give Michigan residents the right to sue if the fracking industry violates the ban. Only 32% oppose the measure, and 12% are not sure.

Fifty-nine percent (59%) of the respondents said they support changing the Michigan Department of Environmental Quality’s directive that currently requires the State to foster the oil and gas industry and maximize oil and gas production, to focus more on protecting Michigan’s environment and public health during oil and gas development, which is a key part of the Committee’s ballot proposal language

dysfunction should be strongly discouraged since it fails tothe end of march to July 1998 cialis prices.

one was hypotensive potentially lethal. Therefore, nitrates and Viagra must not ever buy levitra online Miscellaneous drugs (ketoconazole, hyoscine,.

many chronic diseasessubstances of abuse) or from the assumption sildenafil for sale.

The correct classification of the patient with ed should include:lâactivation of the pump removes a stoneâair, creating the vacuum. CiÃ2 ago afflui- canadian generic viagra.

An overwhelming majority, sixty-four percent (64%) of those polled, support a ban on frack wastes being disposed of in Michigan, including frack wastes produced in other states, after hearing that currently frack wastes, including radioactive drill cuttings, muds and sludges, and millions of gallons of fluids containing toxic chemicals, are disposed of in Michigan landfills, injection wells and at Michigan gas drilling sites.

After learning that Vermont banned fracking and New York banned fracking based on concerns about health impacts, and that other states that are heavily fracked such as Colorado and Pennsylvania have hundreds of wells in a single county with documented health impacts, fifty-nine (59%) responded that fracking and frack wastes should be banned in Michigan before the industry creates health problems for Michigan residents.

“Only a ban can protect us from the significant harms of fracking,” said Peggy Case, president of Michigan Citizens for Water Conservation and on the Committee to Ban Fracking in Michigan steering committee. “The poll shows that a clear majority, sixty-nine percent (69%), of Michigan residents, dependent as we are on groundwater wells and the Great Lakes for our drinking water, has serious concerns about the risk of water contamination from the frack industry. It is urgent that we move to alternative forms of energy to protect future generations.”

The Committee to Ban Fracking in Michigan is looking for more volunteers to circulate petitions, donors, and endorsers for the campaign which begins May 22, 2015 for a six-month period. The following Kick Off events are planned to start off the Memorial Day weekend. See http://LetsBanFracking.org

Saturday, May 23, 1:00 p.m.
March Against Monsanto
Liberty Plaza, Corner of Liberty and Division

SOUTH HAVEN
Saturday, May 23, 10:00 a.m. to noon
South Haven Farm Market
Behind the South Haven Library, in the park near pavilion