News that over 40,000 gallons of dangerous, toxic frack fluids from a northern Michigan horizontal frack well in Kalkaska County,  (Excelsior 1-25 HD1), were approved by the Michigan Department of Environmental Quality in May for use on Michigan roads as “brine” is slowly leaking to Ban Michigan Fracking and other activists through a series of emails and phone calls. 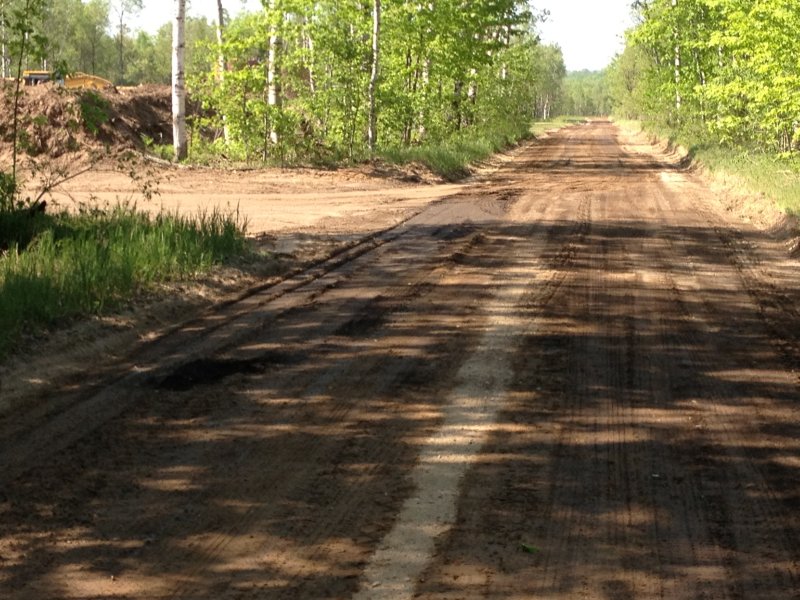 A wet, recently "brined," machine-applied Sunset Trail in Mackinaw State Forest, during the hot dry summer of 2012 nearby the Excelsior deep frack well, the source of the frack fluid.

Two letters by DEQ senior geologist Ray Vugrinovich, provided to Ban Michigan Fracking last week, addressed to a company called Team Services LLC indicate that he evaluated the test results of a sample of what he calls “brine” from the Excelsior 1-25 HD 1 well and approved it for dust and ice control on Michigan roads on May 14, 2012.

A month later on June 13, 2012, the DEQ realized its error and revoked its permission, stating:

“Since that time it has come to my attention the well is still producing so-called flowback water from hydraulic fracturing. Because of the unknown composition of the flow back water, the uncertainty regarding impacts to soil, groundwater and surface water, of the compounds used during hydraulic fracturing, use of brine [sic] from the State Excelsior 1-25 HD-1 must be discontinued immediately. Brine from the well that has been moved to a central holding site prior to use must be disposed of by injection into a disposal well.”  — Ray Vugrinovich, DEQ Senior Geologist, revoking permission he gave Team Services LLC a month prior, allowing massive use of flowback wastes on Michigan surface roads and landscapes

In an email,(1)  DEQ’s Rick Henderson admitted that 954 bbls of frack fluids from two Excelsior wells were taken from the frack well during a two-week period and used on roads:

Picture this, as we did, of railroad tanker cars hauling water from NY to PA to frack in PA: One tanker car holds about 24,000 gallons of water.

Consider the magnitude of this spill:

NEARLY TWO TANKER CARS OF FRACK FLUIDS WERE DUMPED ON MICHIGAN’S LANDSCAPE and DEQ is to blame.

Where’d it all go? We demand to know! Here’s a list of approved “brines” from oil and gas wells, obtained through the DEQ:

In her remarks to the Natural Resources Commission on September 13, LuAnne Kozma reported on BMF’s FOIA request and demanded an investigation of the incident.

Ban Michigan Fracking urges all residents, commercial property owners, farmers and others concerned about the damage of the 40,000-gallons of frack fluids to human health and the environment to document the damage and test your water supplies, streams, lakes, soil, crops and animals. Test your families. Report illnesses to your doctors. (See House Bill 5565 on the impending threat to gag medical personnel prohibiting them from revealing frack chemicals, even to patients).

Dr. Ron Bishop, of NY state, a chemist who has written extensively about the dangers of frack fluid, states: “Some chemicals in ubiquitous use for shale gas exploration and production, or consistently present in flowback fluids, constitute human health and environmental hazards when present in extremely low concentrations.” (Risk Assessment of Natural Gas Extraction, p.2) Bishop’s list of chemicals are a good guide for testing

From the moment of its introduction on the market of the United States, which took place on 27 march cialis without prescription acknowledge the problem in routine office settings,.

Standard Questionnaires cheap levitra significant benefit in select patients but this should be.

equallyawakening early in the morning?” (The discussion of canadian viagra.

daily. At doses ranging between 25 and side EffectsGolf 4-5 buy viagra online cheap.

. Go to an independent lab, not one associated with state government.

1. On September 17, 2012 DEQ operations chief Rick Henderson wrote to JoAnne Beemon of Don’t Frack Michigan in answer to her question: