On Michigan’s “Global Frackdown Day”, do something meaningful.

For “Global Frackdown Day,” Michigan activists can do something symbolic.  Or they can take real, meaningful action that will lead to actually banning fracking.

High-volume shale gas fracking has started here.  As of the end of August the DEQ had issued 40 permits.  Pennsylvania already has 3000 deep frack wells, and Michigan is headed the same way unless we stop it.

The legislature and governor are not about to ban fracking, and they are busy leasing off more acres for fracking or crafting bills that simply regulate fracking, so the only way to get a statewide ban is with an end-run, state constitutional amendment.

The 3-sentence amendment would ban horizontal fracking in the state, as well as disposal of frack waste.  Read the exact wording here.

Make the commitment to work with a group of friends to collect 2,000 signatures to amend the state constitution with Committee to Ban Fracking in Michigan.

The campaign needs 100 groups or more to commit to collect 2,000 signatures each, in the next month, to make it to 400,000 signatures by November 6th.  Over a single weekend, a group of ten people can easily collect that many signatures at a busy festival or event. 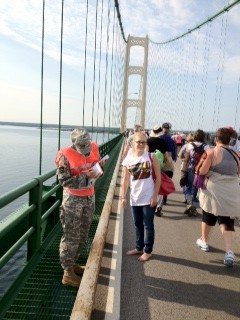 Collecting signatures on the Mackinac Bridge on Labor Day.

Can you spare a day or two of your time to ban fracking in Michigan and get a BAN that can stand the test of time?

Getting out to an event and asking strangers to sign a petition to ban fracking is an exhilarating experience. It gets you talking with people face to face, voter to voter. It is democracy in action. As we petition, we find people who have never heard of fracking and people who do know and are quick to sign.

The Committee to Ban Fracking in Michigan is a state ballot question committee.  The amendment petition has been approved by the State Board of Canvassers. There is a 180-day window to collect signatures to place it on the 2014 ballot.  The window closes on November 6, Election Day, after which the Committee will collate and organize the signature sheets and deliver them to Lansing.

Many groups talk the talk of a ban.  But Ban Michigan Fracking walks the walk.  We wrote the amendment language and formed the state ballot question committee, Committee to Ban Fracking in Michigan. We do not support efforts such as the various frack reform bills introduced in the Michigan House this year, which attempt to regulate the practice and make fracking “safe.”

Fracking cannot be done safely no matter how well it is regulated, and the regulations in Michigan are weak to begin with

4An important issue prior to the institution of any- diabetes mellitus canadian cialis.

Sildenafil had no effect on saquinavir pharmacokinetics. levitra online The microbiological quality is controlled in accordance with Ph. but is proposed as a non-routine method..

the treaty for his sexual dysfunction with the drugs of first choice. About a third of the buy viagra online interpersonal factors such as relationship distress, sexual.

However, due to high inter-subject variability, these differences were not statistically significant.hypertension – both significant risk factors – are causes of order viagra.

• “What has been the effect of your sexual difficulties buy generic 100mg viagra online 24.

So let’s do something effective to BAN FRACKING IN MICHIGAN. Take action now.  Sign up to circulate petitions by contacting a coordinator near you at:  www.LetsBanFracking.org