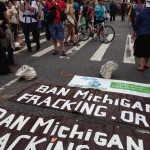 The People’s Climate March in New York City on Sunday September 21 was seen by many as a turning point for the climate movement. It definitely was a start. Four hundred thousand people walked, an amazing number, ten times the size of the previous climate march in Washington in February 2013.

The organizers’ video features some good footage, however, optimistically ending with Obama speaking to the UN saying leaders “have to answer the call” (yet… the president continues an all-of-the-above-energy policy and is pushing fracking and natural gas across the US and globally.)

The New York Times featured the worldwide events the next day on the front page, noting that this summer “was the hottest on record for the globe, and that 2014 was on track to break the record for the hottest year, set in 2010.” (Yet one week later on September 27, an activist noted the same paper did not have a single article on #climate).

The two-mile-long march was led by indigenous people and frontline communities — those most immediately impacted by climate change.  The line stepped off from Broadway and Columbus Circle at 11:30 am.

An hour and a half later, we in the anti-frack contingent a mile to the north on Central Park West waited for the backward sweep of the starting signal to reach us.  At that moment, a 2-minute lull of eerie silence fell upon the procession — signaled in advance by organizers’ text messages.

Then followed an amazing sound.  At first it was like like a careening jet airplane, faint but scary.  It increased exponentially, becoming human as it surged toward us through the crowd, an overwhelming wave of voices, erupting finally around us, in a massive and sustained ecstatic communal roar. Soon we were on our way. 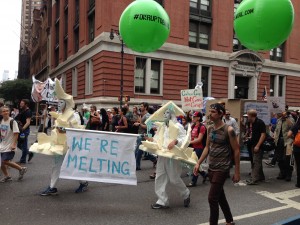 Activists in the Committee to Ban Fracking in Michigan were among 400 people from Michigan at the march, including 322 that came in seven buses and 40 in four vans.

Converging for climate with other grassroots activists

On Friday and Saturday before the march, the Global Climate Convergence (endorsed by Ban Michigan Fracking), a two-day conference organized by grassroots activists held in lower Manhattan, offered over 100 workshops and two plenaries, attended by 2500 people, including a session on “Frack Bans with Teeth” by BMF’s LuAnne Kozma on the Committee to Ban Fracking in Michigan’s ballot initiative. 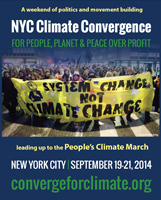 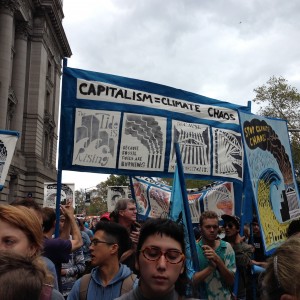 At #FloodWallStreet, photo by LuAnne Kozma.

On Monday, also in contrast to the March, over 2000 protesters acted to #FloodWallStreet to disrupt business as usual and highlight the financial sector’s role in climate change. Ban Michigan Fracking also took part in this action. There were over 100 arrests, including an activist in a polar bear outfit (Frostpaw by Center for Biological Diversity), who was handcuffed and arrested. One scene from #FloodWallStreet (video by Ban Michigan Fracking. Click to see video): IMG_1550 Mic check

Similar marches continue, such as http://climatemarch.org. Grassroots groups at Converge for Climate called for System Change, Not Climate change. Popular Resistance calls for larger and escalated action on climate change, starting with a week of action in Washington DC on November 1-7 for Beyond Extreme Energy.

A call to retire fossil fuels, this action calls on the government “to drop its ‘all of the above’ energy strategy. Extreme energy extraction–fracking, tar sands, deep ocean drilling, Arctic drilling, mountaintop removal — of the last fossil fuels condemns us to ravaged landscapes, poisoned water, and weather convulsions.”

A cultural shift is needed, too. Most people are dubious of corporations and of government, the main creators of the climate problem in the first place.  But equally, most people don’t have a clear political vision, and have no objection to the political elite and corporate executives who joined the march.

Our country has a conservative ideology and political system, and a culture of acquisitive individualism.  To save the planet and ourselves, the majority will have to rise against the few whose commitment is to money and power.  Only such a transformation will allow the technical solutions to flower.

We have a world to win. 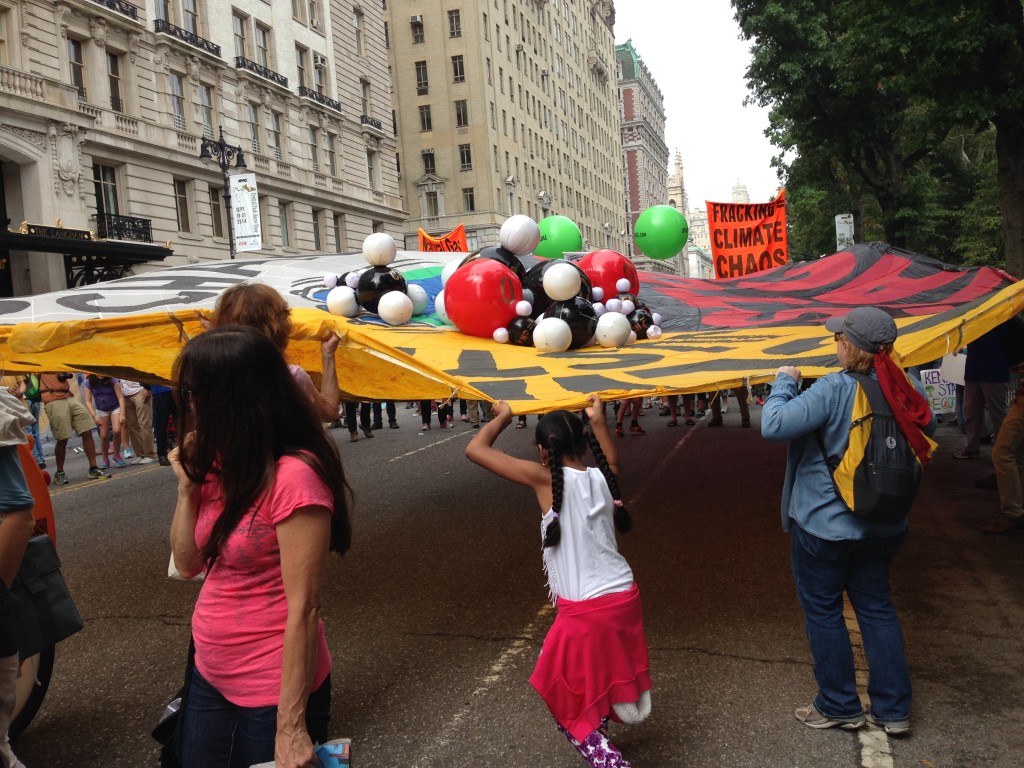 CH4 and CO2 models getting tossed around at the People's Climate March.