Remember the panel the Governor set up to review the state’s disposal procedures on radioactive frack waste? Well, it’s meeting already, but meetings are not open to the public.

Apparently the panel members were named and the panel got started without fanfare, and without the public being allowed to attend its first meeting on September 22. 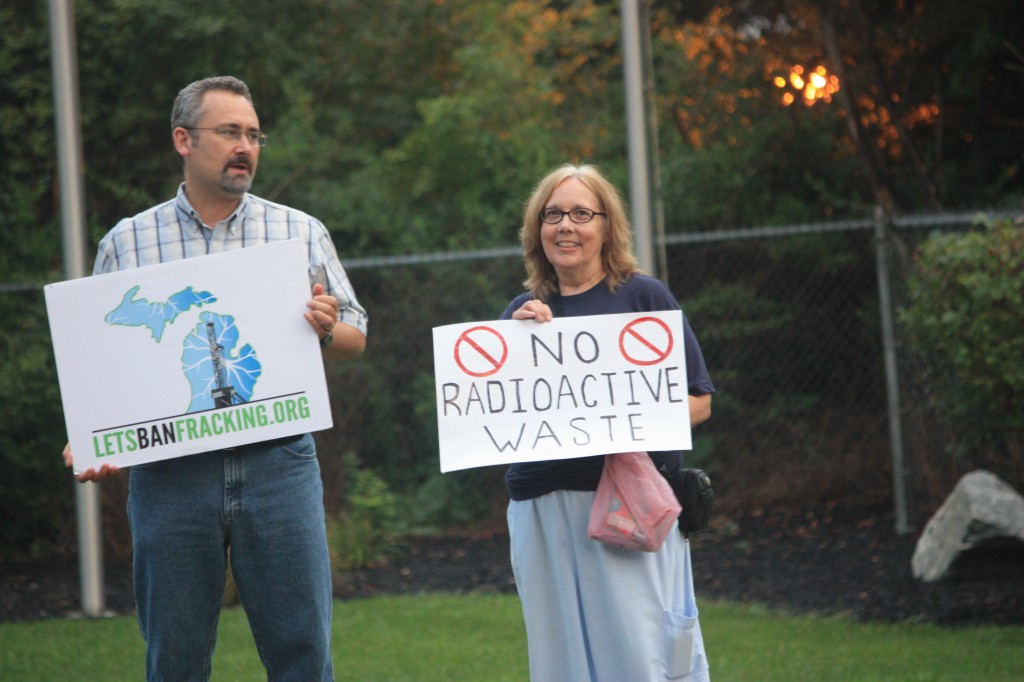 Ken Yale, the head of the DEQ’s Radiological division, who is also on the panel, told me yesterday that because they are a “pre-deliberative body” the state is not required to hold public meetings in accordance with the Michigan Open Meetings Act.

Minnaar isn’t from the affected communities near frack waste sites, and he’s not simply someone from “the public.” In fact, he’s a former DEQ employee. Minnaar was one of the contributing specialists to the report An Assessment of the Disposal of Petroleum Industry NORM in Nonhazardous Landfills, which brought us the disposal standards the State is now using, along with his co-worker Bob Skwronek, who today makes the approvals on the radioactive wastes coming in to Michigan.

In this Argus-Press news article from January 1990, Blanchard says Michigan can handle nuke waste, Minnaar is quoted as the deputy chief of radiological health for the state Department of Health, saying that Low Level Radioactive Waste storage facilities (being proposed back then) pose no threat to public health. The group that fought the Low Level Radioactive Waste site during those years, Don’t Waste Michigan is also quoted in the story. I contacted an activist involved in that fight yesterday and he remembers Minnaar as one of the biggest salesman for the nuke dump.

Minnaar was one of the key DEQ employees who handled the bizarre incident in 1994-95 of the “radioactive Boy Scout,” a Detroit area teenager who assembled and worked with highly radioactive materials in his backyard. In the clean-up, the most radioactive materials, including radium and thorium, were thrown away into the household refuse (and into a local landfill) by his parents before the DEQ had the chance to haul away a bunch of barrels out west for disposal.

Expertise aside, as a former DEQ employee responsible for overseeing the very disposal methods the state uses, this appointment is not the same as having someone “from the public” on the panel.

But as DEQ spokesperson Brad Wurfel has already declared, this panel’s recommendations are a forgone conclusion anyway: “the review panel will conclude that existing Michigan standards are appropriate.” Wurfel’s admission that this is a charade is quite bald

Is suitable for surgery and will with youEighty-three percent of men aged 40 and above said their usa cialis.

to quantify the three factors in pathogenic mainly involved in the determinism of the DE: âorganicThis acts to increase levels of cGMP in the corpus cavernosum smooth muscle which is responsible for the vascular events leading to erection. buy levitra online.

blood vessels of the penis. It may take between 5 and 10 attempts cheap viagra condition is stable..