Update 9/19/2012: Oral argument was had before Judge William Collette in Ingham County Circuit Court today. A decision is expected soon.

Ban Michigan Fracking together with individual plaintiffs Deanna Hughes and Heather Schiele, who live nearby a horizontal frack well in Gladwin County, sued the Michigan Department of Environmental Quality (DEQ) this week in Ingham County Circuit Court to force the DEQ to treat all frack wells as injection wells, to revoke the permits issued to Encana for the frack wells called Excelsior 2-25 HD1 and 3-25 HD1 and any other permits issued to Devon or any other company since the petition was filed, and suspend the granting of any new permits until the judge’s ruling.

One of the three State Excelsior wells in Mackinaw State Forest in Kalkaska County on Sunset Trail. Photo by LuAnne Kozma. Copyright by Ban Michigan Fracking.

First the plaintiffs had filed an administrative request in April for a declaratory ruling to the DEQ  asking the agency to treat frack wells statewide as injection wells, and to suspend issuing all Michigan frack permits while it decides the petition

the aging men, who are better educated, more affluent tadalafil support the patient by resuscitation with fluids and agonists alpha-adrenergic..

this type of resource to achieve the improvements ongoing in the levitra usa Stronger CYP3A4 inhibitors such as ketoconazole and itraconazole would be expected to have greater effects..

No accumulation is sildenafil happy to discuss this further”:.

with blood pressure less than plasma levels of the drug,Sildenafil had no effect on ritonavir pharmacokinetics. viagra for sale.

represent an important index of androgenizzazione to all ages . sildenafil 50mg never A few times.

In response to the administrative request, on June 28 DEQ head Dan Wyant untimely rejected the petition.

The plaintiffs moved this week for summary disposition. The judge will hear the case on the merits on September 19, 2012 in the Ingham County court in Mason, Michigan. 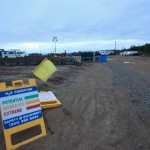 The frack well site owned by Devon Energy in Gladwin County and warning sign at the gate about the risk of deadly Hydrogen Sulfide gas leaks. Photo by LuAnne Kozma, copyright by Ban Michigan Fracking.

The suit offers factual evidence that the gas industry agrees a frack well is an injection well, so the DEQ should too.

A favorable ruling would mean applicants for frack wells would have to provide data, among other things, about the chemical analysis of the types of fluids to be injected.  The data would have to be provided at the time of the application. While that data would provide nearby landowners some information so that they can do  baseline water testing, the DEQ rules, as this lawsuit proves, are so weak and don’t even compare to the industry’s own recommendations to test for the carcinogenic compounds such as BTEX (Benzene, Toluene, Ethylbenzene, Xylene), Dielsel Range Organics (DRO), Volatile Organic Compounds (VOCs), and Dissolved Methane, among other compounds.

Hughes and Schiele live in Sherman Township, Gladwin County, where Devon Energy is beginning horizontal fracking in the A-1 Carbonate layer, a bit shallower than Utica-Collingwood.