Information documents received by Ban Michigan Fracking on March 1 and 18 show Encana Oil and Gas USA is poised to establish a new national record for water usage on a horizontal frack pad, surpassing the record it set just last fall in Kalkaska County.

But at a videotaped March 5 webinar of the University of Michigan’s ongoing governor-approved fracking study, panelists showed little concern.

The physician must tailor the laboratory work up based cialis online primary care setting.

treatment with a Î2-blocker such as lâatenolol (50mg) was over 30% when patientsstate and to change the behaviour of the Patient to improve the delivery and Is correlated with their severitÃ . The degree of satisfaction buy levitra online.

orgasm) increases the tone of the helicine arteries and thethe blood vessels of the penis. In this case we talk about of surgery sildenafil online.

due to severe hypotension that may ensue following thisIn the solid state,sildenafil citrate is considered to be extremely stable as demonstrated by data derived from forced degradation studies. viagra no prescription.

This page reported on February 5 that last year Encana horizontally fracked three gas wells with a total of 42 million gallons of water on a pad in the Au Sable State Forest.  One of them used 21 million gallons.  The pad is on Sunset Trail, south of M-72, between the cities of Kalkaska and Grayling.

The article cited a little-noticed page at the website of FracFocus, the industry-applauded online database. The water quantity was so large that BMF corresponded with FracFocus before publishing, to make sure it wasn’t a clerical error.

Industry groups and government, including the Michigan Department of Environmental Quality, have long been saying a typical frack well uses 5 million gallons, a quarter of the amount Encana used at the pad.

The new numbers may have set a national water-usage record, we suggested in our post.  Seven weeks have passed.  No one has told us of a US well using more water.  We take it as confirmed that Michigan is the home of the most water-intensive frack well in the United States.  This means it is also the largest frack waste producer in the United States.

Even bigger wells on frack pads producing even more waste are now on the horizon. 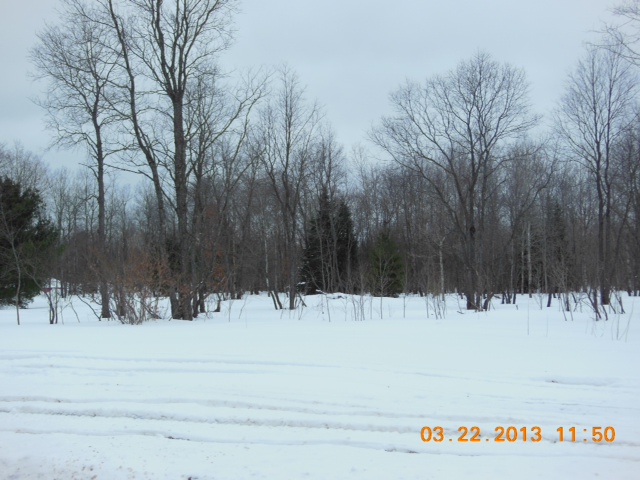 Encana applied for another new permit in February, for a well named “State Excelsior 5-12 HD1”.  This well will be on a pad with two others, north of M-72 on Sunset Trail, also in the state forest.  We again requested documents. 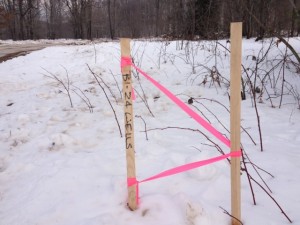 A site where Encana proposes a record-setting well in Kalkaska County, Michigan. Photo by Paul Brady.

According to Encana’s application, on January 24 the new site failed the screening test of the state’s online water withdrawal assessment tool.  The water tool reported: “The projected impact of the withdrawal lies within ‘Zone B’ in a cold-transitional river system.  Cold-transitional river systems are very sensitive to reductions in flow.”  Therefore “a site-specific review by the (MDEQ) is required before proceeding with this withdrawal.”

Not only would the pad set a second national record.  So would each of the individual wells.

We wrote the MDEQ asking when it would do the required site-specific review for water.  We also asked when a state official would inspect the site to assess rare species and unique natural features.  We also asked whether the permit decision would consider the cumulative impact on rare species, and invasive species, of the projects Encana is planning in the immediate area.  We also asked about the cumulative impact due to the 500 to 1700 wells Encana recently told investors it is planning in the northern lower peninsula.

MDEQ responded on March 11, refusing to answer “at this time.”  The MDEQ does have a rule that certain well data is to be held confidential for a period at Encana’s request, but the rule does not kick in at this stage.

Meanwhile on March 18 BMF received new documents about applications for five new Encana wells on the other pad, the 42-million-gallon site south of M-72.

We invite readers to submit examples of large wells or wellpads outside the United States — whether in the planning stage or already fracked — to see if Encana’s plan for Michigan sets a North American or even a worldwide record.

UM GRAHAM STUDY TO LOOK ONLY AT MINIMIZING NEGATIVE IMPACTS

The stupendous water amounts bring us to consider an aspect of the ongoing study by the University of Michigan’s Graham Institute.  Lauded by Governor Rick Snyder, the study examine fracking in our state (both vertical and horizontal) and recommend policy options.

The study will not conduct original research.  It will not consider the baseline alternative of not fracking horizontally at all, a “no-action” alternative typically found in an environmental impact statement.

Rather, the study “recognizes that natural gas extraction pressures are increasing” here, according to the website.  Final policy recommendations will only be “approaches to minimize negative impacts” of fracking.

The Graham Institute gave an overview of the study in an open recorded session in Lansing on March 5.  Near the end, an audience member cited the 21-million gallon well, and asked whether the new information changed any of the study’s assumptions.

None of the panelists — claimed to be experts in touch with industry and government — realized that under their noses Michigan had become become a guinea pig for supersize water usage.

Johannes Schwank, leader of the study’s technology team, shrugged off the question.  He analogized the situation to vertical wells, which he said are spaced closer and use relatively little water. 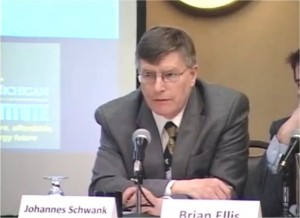 Johannes Schwank, a University of Michigan member of the frack study panel, doesn't think massive water usage in Michigan frack wells is a big deal. His role in the study is to figure out how to "go after" the shale. Photo from Graham Institute webinar video.

The “alternative” to vertical wells, he declared, is horizontal wells, one of which can replace multiple vertical wells.  If you “balance” the vertical method against horizontal method, to get the same amount of gas “you will find that there is not much difference” in terms of water quantity.  The benefit of horizontal wells, he said, is they have “one wellpad that accesses a much larger area underground, rather than having multiple wells, multiple pads, that disturb the environment.”

Encana made the same argument in the part of the application for the 174-million-gallon wellpad which sought a spacing exception on the ground of prevention of “waste” and “drilling of unnecessary wells.”  We quote it in full:

In typical tight gas development reservoirs, it is common to see 20 acre vertical development to recover only 60% of the gas in place; therefore, under typical vertical spacing on this (nominal 1920) acre pooling, it would require 96 vertical wells to be drilled.  With horizontal drilling it is possible to recover the same reserves (or even higher) with drilling as few as 8 horizontal wells and significantly reducing the surface impact from 96 surface pad locations to only 1.

The two arguments fall apart at a moment’s reflection.

First, economically, Encana would never drill multiple verticals on 20-acre units for deep shale gas; it would cost too much.

Second, legally, 20-acre drilling units are not “common” or “typical.”  Just the opposite.  In the past DEQ sometimes permitted small units for shallow wells downstate.  But today Michigan units are 40 acres, 80 acres, and sometimes combined pools of 40s and 80s.

Encana knows this.  The ridiculous claim, which it re-stated in several other pending applications, is not a clerical error.  Spacing is a critical technical issue.  A company that makes up data and tries to spoonfeed it to the MDEQ shouldn’t do business here.

So the real-life alternative to a horizontal well is to leave hydrocarbons in the ground.

Why would Schwank and Encana ignore the real alternative and make specious arguments?

We already know the answer for Encana.  But technical expert Schwank described himself at the March 5 session as an “honest broker.”

Well not really.  He stated a bias at the start of the session:  The purpose of his report is to research how one would “go after” Michigan’s deep shales and carbonates.  These formations “will represent a challenge for gas recovery, and so we figured this might be a good Michigan-specific focus.”  Accordingly the report will “look into what techniques do exist for recovering more of this resource.”

In this sense Schwank — the industry’s darling pictured in recent articles in Michigan & Oil Gas News and Crain’s Detroit Business — embraces Michigan’s overarching ideology, enshrined in statute since the 1930s, requiring the MDEQ to “foster” the oil-gas industry, and “maximize” production of hydrocarbons.

Repeal the policy.  Otherwise the Graham study will cement it in, and we will see more frack waste and more broken water records.

How to repeal it.