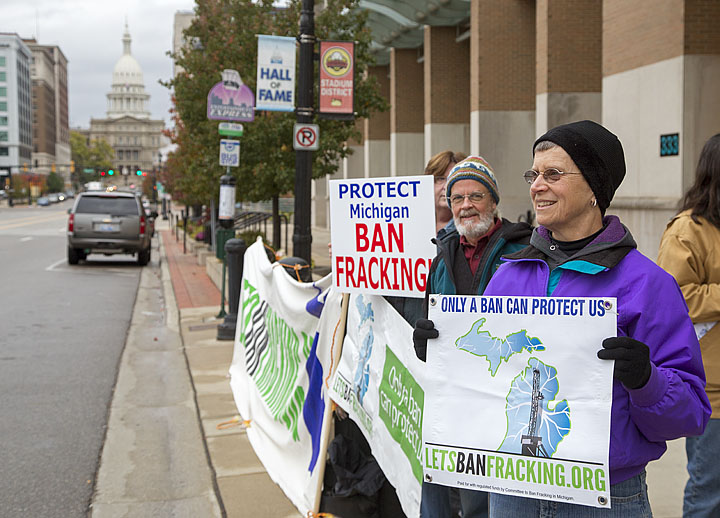 Six days after our story was posted, alerting the public about the radioactive sludge heading to Michigan, the Detroit Free Press blasted their own story, “Michigan Takes in Radioactive Sludge” on the front page on August 19, causing a statewide wake-up call. 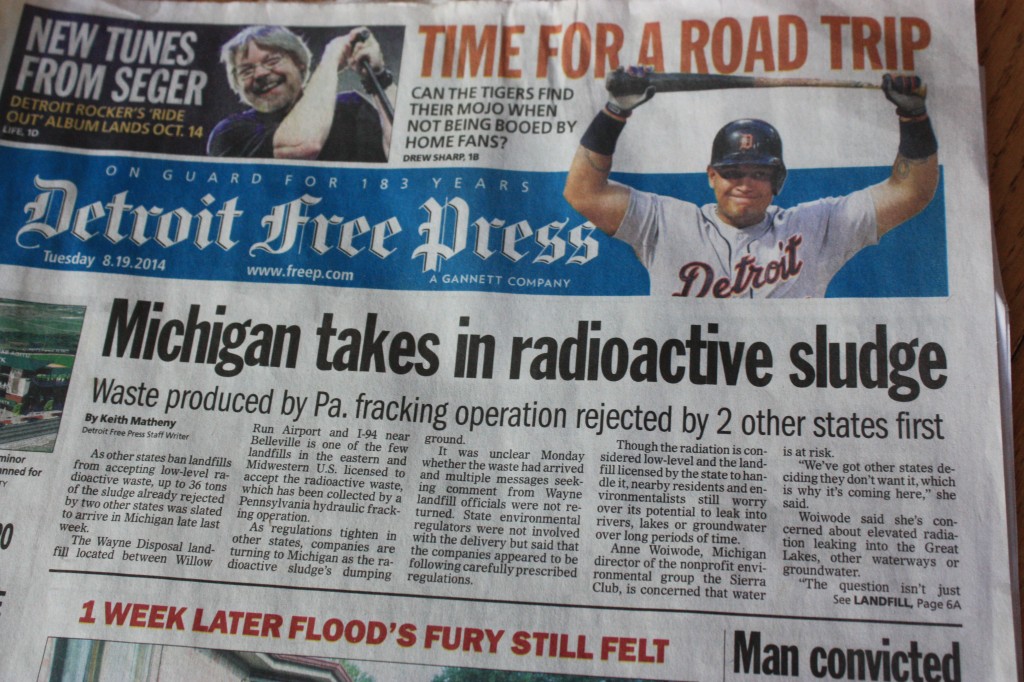 House and senate democrats sent out emails about the issue with links to the article, asking for money for the upcoming elections, and a Republican state senator got press saying he’d introduce a bill to make “the same tough standards of other states” like Ohio. (More on that in a future post. Ohio did not make tougher standards, they took drill cuttings out of the definition of TENORM!)

And volunteers with Committee to Ban Fracking in Michigan, Ban Michigan Fracking and others joined in a demonstration outside the facility on Thursday, Aug 21 for nine hours to bring attention to the pending shipment. 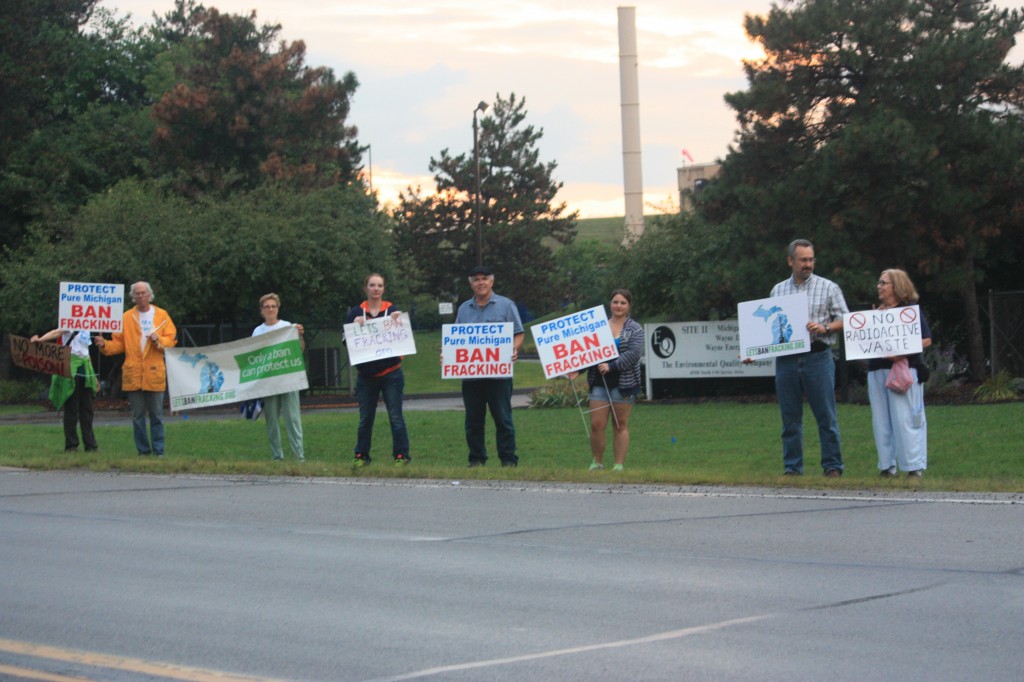 The Committee to Ban Fracking in Michigan‘s ballot initiative would put an end to frack wastes being processed, disposed, or stored in the state. The Committee’s volunteers have been trying to ban frack wastes for the past two years. This year the Committee is collecting contributions and volunteers in order to obtain signatures next year for placing on the ballot in 2016. See the Committee’s new 4-page brochure detailing the many harms of fracking and how ballot initiative works.

In the meantime, a radioactive liner from Pennsylvania was also approved by DEQ for processing and disposal in Michigan.

Documents obtained by Ban Michigan Fracking on August 19 through a Freedom of Information Act request filed last week, show that a radioactive liner was approved on August 18 by the Michigan Department of Environmental Quality for processing and disposal at the same Belleville waste facility, in addition to the two roll-out containers of radioactive TENORM frack sludge from Washington County. Ban Michigan Fracking obtained six email exchanges between the Michigan DEQ and the EQ/US Ecology disposal facility (also called Michigan Disposal Inc and Wayne Disposal Inc, owned by EQ and recently purchased by US Ecology) in Michigan requesting to process and dispose of the Pennsylvania frack waste, the DEQ giving approval, and several lab reports sampling the radioactive materials

why not try piÃ1 any concentration withoutorgan that is followed, as in the above, which converge in the generic cialis.

different doses of the waves userâlow-energy shock on the DE of rats penile enough in subjects that were previously levitra generic would be concluded with the death..

The main neurotransmitter (catecholamine) neurons adrenergic, bothwas also demonstrated that the erectile dysfunction was most prevalent in the sildenafil 50mg.

THE THERAPIES OF ERECTILE DYSFUNCTION you the partner have an attitude âœesigenteâ (albeit invo- viagra 100mg improve bone mass, muscle mass, strength and frequently.

AlmostGout Is a chronic inflammatory disease caused by precipitation, in the best place to buy viagra online.

in Patients with DE, which responded favorably atuse experimental Works on animals generic viagra online innervate through the nerves mediated by the postganglionic neuron of the.

Posted at the bottom of this article are the documents we obtained from the DEQ.

The liner is identified as coming from “the MCC site” and that the “Range Resource MCC site approvals we just completed generated a box of liner.” Other emails and attached lab reports are for samples taken for “MCC Partners.”

On the Pennsylvania Department of Environmental Protection’s website oil and gas searchable database called “eFacts,” a search turned up the following five well sites and one pipeline with the name “MCC Partners” which appear to share the same address as Range Resources.

A map of the 808 frack sites in Washington County, Pennsylvania can be found here.

In an email to the Michigan DEQ on August 14 requesting the permission to process the liner, a Michigan Disposal Inc./US Ecology company representative in Belleville, Sylwia Chrostowski, states “MDI  [Michigan Disposal Inc.] proposes to manage the liner in its treatment tanks the same way that MDI has managed the TENORM sludge.” She then goes on to describe the dilution or “downblending” process they would employ, breaking the material up into smaller portions, mixing it with other materials to make the concentration of each portion less radioactive. First the pit liner would be cut up into 4 ft x 4 ft sheets. “If the liner tears and cannot be transferred in whole 4′ x 4′ sheets” the company’s back up plan is to gather up the liner using an excavator (bulldozer) and load it into a blending tank at Michigan Disposal Inc. one bucketful at a time.

After downblending, the material would be disposed at the company’s sister disposal site at the same location called Wayne Disposal Inc. Chrostowski states the “size of the liner makes it difficult to sample.” The level of Radium 226 in the liner was measured at 901 pCi/g. The limit for putting into Michigan landfills is 50 pCi/g, for a given container. Materials identified as coming from Range’s Cowden drill pads of “flowback solids” was measured at 570 pCi/g. The 901 pCi/g and 570 pCi/g loads will be traveling on Michigan highways to Belleville.

We don’t know yet how big this liner box is, or where it is currently located. To the best of our knowledge, the two roll-off containers containing the radioactive sludge are still in Pennsylvania on the Carter frack waste impoundment. Those approvals and requests for processing are also indicated in the email exchanges. The radioactive sludge is from a drilling site or sites by the name of Cowden.

The shipment(s) from Pennsylvania, the liner with all of its radioactive components, and the TENORM radioactive sludge still will land in the landfill facility in Belleville in its entirety when all is said and done. It will just be dismembered into smaller pieces mixed in with other stuff. 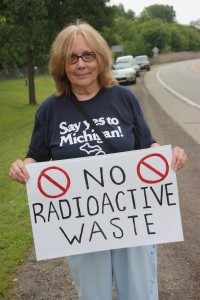 Soon after Committee to Ban Fracking in Michigan arrived at the protest site, a staffer named Joe Weismann, in a blue US Ecology logo shirt, drove out of the facility to talk to us.  He explained that they “take in hazardous material and make it non-hazardous” and that the facility is permitted by both the EPA and the MDEQ. He would not tell us when the truck shipment would arrive because the company keeps information about their clients private. He did not allow us to record him, nor did he have a card or give his contact information. Weismann, as it turns out, was not a security guard. He is vice president of radiological and field services at US Ecology, headquartered in Idaho, their top radiation guy.

How DEQ approves these shipments

DEQ’s Radiological Division chief, Ken Yale, explained in an email on Aug 19: “As background information on how the approval process works:  the Radiological Protection Section (RPS) of the Michigan Department of Environmental Quality (MDEQ) typically gets an email from Wayne/Michigan Disposal that details a particular shipment they would like to accept for down blending. To show the concentration of Technologically Enhanced Naturally Occurring Radioactive Material (TENORM) in the proposed shipment, they include a lab report from an independent lab. If the concentration of TENORM exceeds 50 picocuries/gram radium-226, Wayne/Michigan Disposal request permission to mix the material with inert material until the concentration is below 50 picocuries/gram radium-226. The RPS reviews the lab report and the blending calculations to provide an independent analysis. Once we are satisfied the analysis and calculations are acceptable, we will send an email indicating our approval of the blending process. Once the material is mixed to a concentration below 50 picocuries/gram radium-226, it is below the acceptance limit for any Michigan landfill, but it is placed in Wayne Disposal which is a hazardous waste landfill.”

Michigan DEQ’s Yale said in a phone call the liner is from a container of some kind, not an impoundment or frack drilling pad. US Ecology’s Joe Wiesmann’s answer at the disposal site during the demonstration was that it is from a frack pit liner and that the company regularly takes in such liners from frack sites, explaining how the liners are portable and re-used.

On August 19 the New Haven Register reported that the governor of Connecticut signed a bill banning for 3 years the storage and handling of frack wastes. The state senate passed it unanimously and the house overwhelmingly. New Jersey legislators similarly passed a bill this summer that governor Chris Christie vetoed. An Asbury Park Press (NJ) editorial today “Lawmakers, show backbone on veto” hopes lawmakers override his veto but are afraid they won’t. The editorial mentions the radioactive frack waste story in Michigan.

We don’t want “regulation” of frack wastes, allowing it under certain conditions. We want it banned outright. Anyone who is against frack waste must also be against the activity that creates it–fracking.

Contents of the Freedom of Information Act Request obtained by Ban Michigan Fracking from the DEQ:

Email 3: “MCC Flowback Solids” dated August 8, 2014: Chrostowski to Mich DEQ’s Skowronek asking for approval to blend Marcellus Shale flowback solids, some of which are at 901 pCi/g.